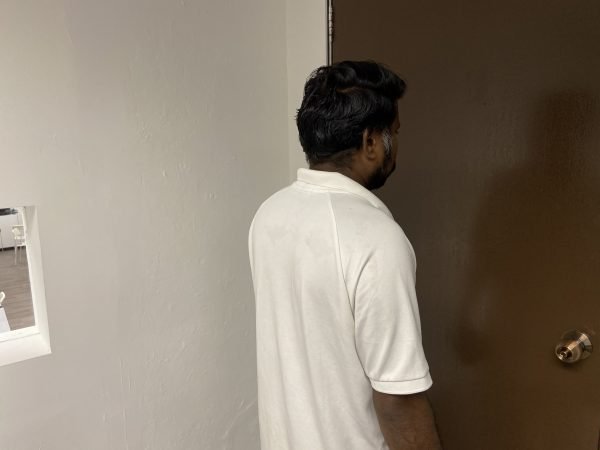 Mr Moda*, 35 years old, is a father of two children, a daughter who is 12 years old and a son who is 3 years old. He and his family lives in rural India where crippling poverty is a norm and came to Singapore on April 2018. In order to work as a construction worker and better provide for his family, he needed to raise S$3,000 to pay an agent. He sold his wife’s jewelry and borrowed from relatives in order to raise the needed sum.

While working in Singapore, Mr Moda has been in two workplace related accidents.

Mr Moda crushed his left middle finger while lifting heavy machinery. He informed us that he was given 50 days of MC but returned to work after 20 days of rest. He also told us that his employers only paid him 20 days of MC Wages, which was less than half of his total MC.

While wielding an iron, the rod slipped out of Mr Moda’s hands and cut his upper lips. He was sent to a government hospital where he was hospitalized for 3 days and needed multiple stitches to close the gaping wound on his lips. He was given 20 days of MC but was not given his MC Wages.

Despite waiting and repeatedly asking for his owned MC Wages, his employers refused to pay him. In the end, Mr Moda sought assistance from a lawyer who filed a complaint to MOM. 10 days after the complaint was filed to MOM, his employers terminated his work permit.

Mr Moda informs us that he has received Work Injury Compensation of S$2,619. Of which, he has to repay back his lawyer of close to S$2,000 as they assisted him upfront furst of room rental payments, living expenses and lawyer fees. After paying his lawyer and the law firm. He is only left with S$669.

Mr Moda has returned back to India without getting his owned MC Wages. Ray of Hope would like to raise S$600 (S$200 x 3 months) to defray Mr Moda’s family expenses in India. Please give hope to Mr Moda as he and his family is going through a very difficult time.

* Name has been changed to protect the identity of Mr Moda

Hope that you can unite with your family soon!

Responding to appeal from Healthserve

Everything will be fine again!!