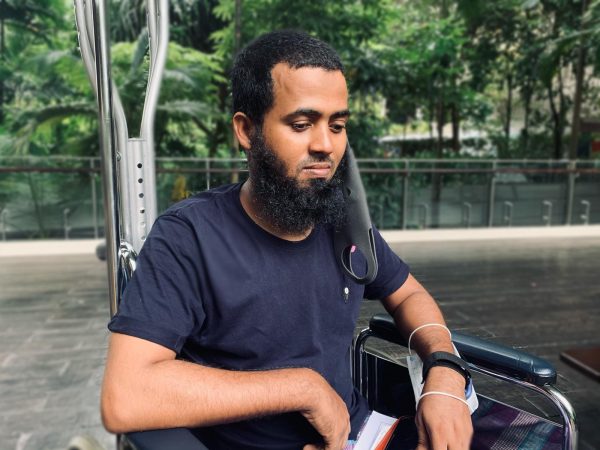 You are donating to Alam Saroar through Ray of Hope

27-year-old Alam was employed as a general construction worker and had paid a S$10,000 agent’s fees to come to Singapore for work. On 11 October 2020, Alam was on his bicycle on the way back to his dorm when a vehicle collided with him on the road. The accident caused him to injure his lower right leg.

Alam did not say a word regarding the accident as the driver told him that he would be taken care of. The driver has since been uncontactable, and Alam took no photo regarding the accident. Alam’s employer had to take him to the hospital to get his injury checked. Currently, he is on 30 days of MC and is expected to proceed with a CT and MRI Scan.

Alam is married and is also supporting his two elderly parents back home. Before the accident, he earned about S$600 per month and remitted more than half of his salary to his family. The remaining amount is used for his monthly living expenses. Alam is now reliant on a mobility aid to get around due to his injured leg. Hence, he is unable to work till he recovers.

Ray of Hope would like to raise S$2,800 to defray Alam’s living expenses and to send remittances home to his family (S$700 x 4 months) while he recovers.

May Allah (God) ease your worries and grant you speedy recovery.

Press on Transfer merit to godma MNP and all my ancestors