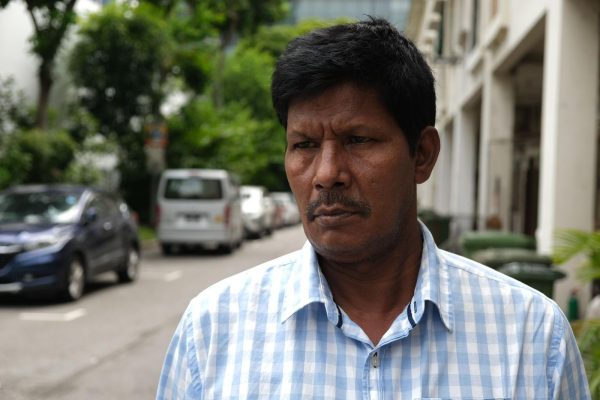 You are donating to Aynal through Ray of Hope

At the age of 28, Aynal came to Singapore in 1997 to work as a general construction worker to support his family in Bangladesh. He has spent more than 20 years working in Singapore in various companies. At his latest place of employment, Aynal worked six days a week, earning around $800 – $900 per month. He would remit about $600 of his salary to his family. The remaining of his salary is used for his daily living expenses in Singapore. He was at his latest place of employment for 10 months before the accident occurred.

On 23rd December 2019, Aynal was carrying out a short drilling job when he lost his balance and landed on his right hip and foot. His supervisor told him that it was unnecessary to put on a safety harness because it was a short drilling job of ten minutes. He was immediately taken to the hospital where he was hospitalized for a night and subsequently received 146 days of medical leave.

As Aynal is the sole breadwinner in the family, his elderly parents, three school-going children, and his wife rely on him for sustenance and other living expenses. Aynal’s 22-year-old married daughter is also dependent on Aynal for financial support as her husband is unemployed. Aynal’s father is partially blind while his mother has been paralyzed for 8 years since the onset of her stroke.

Aynal and his family are also in debt. They have borrowed about $7,800 to help them previously as well as to tide through this difficult period.

Ray of Hope would like to raise S$3,200 ($800 x 4 months) to help Aynal and his family due to the loss of income. This will support them for 4 months and allow Aynal to send some money back home to his family.

Thank you for your hard work. Our country is so blessed because of you. Please recover well. God bless you and your family.

A small token. Hope his injuries heal well and family situation gets better as well.

Please help this man to get through a hard time. We may not be able to change the world but we can change a life.