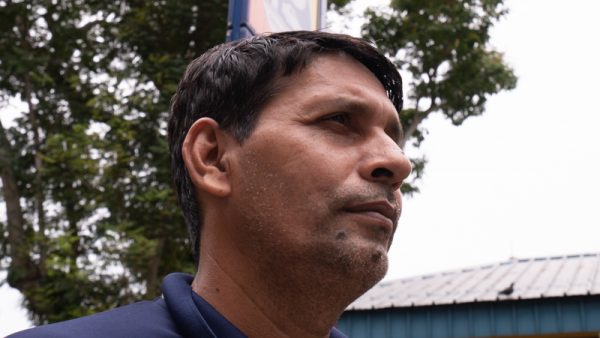 Case update: Ray of Hope will be increasing the monthly assistance for Bachu to $850 (from $600) as he now faces potential partial blindness because of the big delay in seeing an eye professional – another 5 months of a long wait, in December 2020. With the delay in his compensation claim, Bachu has been unable to send remittances home, while being deeply worried about the deterioration of his eyesight.

42-year-old Bachu was employed as a General Worker in the construction industry when he met with the accident that put him out of work. On 31st December 2019, he was hacking a concrete wall when chunks of concrete debris hit his eye. The first chunks shifted his safety goggles, and subsequent pieces entered his exposed left eye. He used water to wash out the fragments in his eyes, but his left eye continued to irritate him, and eventually, it became painful. This was made worse because he was not taken to any medical center immediately. The next day (1st January) was a public holiday and he was told no clinic was open. The following day (2nd January), the boss persuaded him to stay put and see if the pain would go away. They only took him to a clinic on 3rd January, where he was prescribed eye drops when he continued to experience pain. On 7th January, he was taken to another clinic because the earlier prescription didn’t work for him. This time, he was prescribed eye drops and painkillers, which didn’t help much. Three weeks later, when he was no better, he went to the hospital at his own expense.

Bachu was supporting his family with his wife and three sons back home in Bangladesh. When he was working, he usually sends the bulk of his salary home to the family for their use, leaving only about $200-$300 for himself. Bachu’s next hospital appointment is only in December, and he will be seeing an Opthalmology Specialist. But according to an independent eye specialist, it might be a little too late as concrete particles are toxic and have corrosive effects on delicate eye cells.

Ray of Hope would like to raise $2,400 to help Bachu and his family with four months of living expenses as Bachu has not been able to send any remittances home since his accident. Please donate to give hope to the helpless sole breadwinner of his family!

*Ray of Hope caseworkers have cited medical documents provided by Bachu. However, they will not be published as he is currently awaiting updates from MOM.

This is donated on behalf of June Mok. May this little token help ease your burdens & aid you in your life ahead. Stay positive and strong!

God bless you with a speedy and complete recovery of your eye sight!

This is donated on behalf of Chan Hui Minn. May this token ease your burdens and aid you and your family. Wishing you a fruitful life no matter the circumstances.

A little help from each of us will, collectively, help meet the targeted amount.

Take care, and best regards to your family at home.