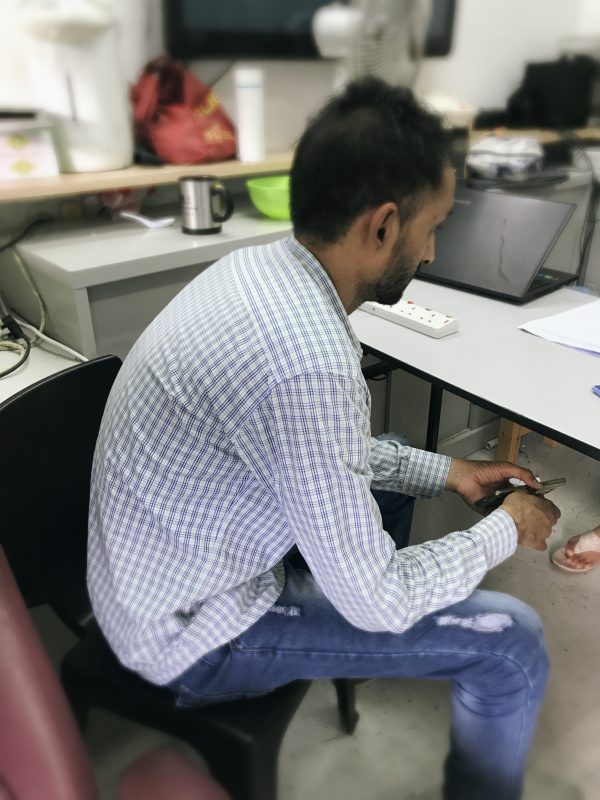 Left helpless, life continues to be an uphill struggle for Mr Rachpal

A loving husband devoted to his family back in India, 33-year-old Mr Rachpal works hard as a construction worker in hope of providing his family with a better life. The bulk of Mr Rachpal’s $750 pay goes to the living expenses of his family each month while he leads a frugal life and spends only a small portion of his pay on himself. Putting the physical exhaustion from his job aside, the filial son to his elderly mum did not mind the long working hours, as long as he was able to provide for his elderly mum, especially when his dad had passed on many years ago.

Mr Rachpal was the sole breadwinner of his family until a workplace accident threw his family’s life into disarray. On 16th November 2017, Mr Rachpal suffered a cut on his finger at work. The condition of his finger soon deteriorated, causing it to swell and bleed continuously due to the lack of attention when Mr Rachpal was refused treatment at several clinics. He was referred for a surgery at the hospital of which his employer had refused to give consent to. Instead, his employer offered him $500 to return home with his injury, which by then had already worsened and required immediate medical attention.

Give Hope to the helpless father of two young kids

Despite the dangerous nature of his job, Mr Rachpal’s employer failed to purchase insurance for the year, thus he is not entitled to receive the disability compensation or medical leave wages as hoped. To make matters worse, the employer had refused to pay Mr Rachpal for the work done in month of November 2017 prior to his work accident. The employer also ceased operations for his company after the accident, leaving the worker homeless when he was kicked out of the company dormitory. Mr Rachpal’s case has already extended beyond the 1-year limit for insurance coverage under Work Injury Compensation Act.

Before this helpless man was finally allowed to undergo a surgery for his infected right hand after much delay, his employer had first poked his injured finger with a needle in a horrific attempt to reduce the swell. Soon after he was discharged from the hospital, his employer chose to declare the company bankrupt and consequentially Mr Rachpal was evicted from the company dormitory and rendered homeless.

Mr Rachpal knows that housing issues aside, life ahead would not be easy for him. With no one to turn to, the helpless worker is worried about how to move on. He is still required to go for regular medical follow-ups for his injury, of which he is unable to afford. During the interview, Mr Rachpal’s eyes welled up with tears as he related his story to the case workers.

ROHI would like to raise $900 ($300 x 3 months) for Mr Rachpal’s living expenses so that he can continue sending some money back home to his family as well. Your donations would give hope to Mr Rachpal and his family!