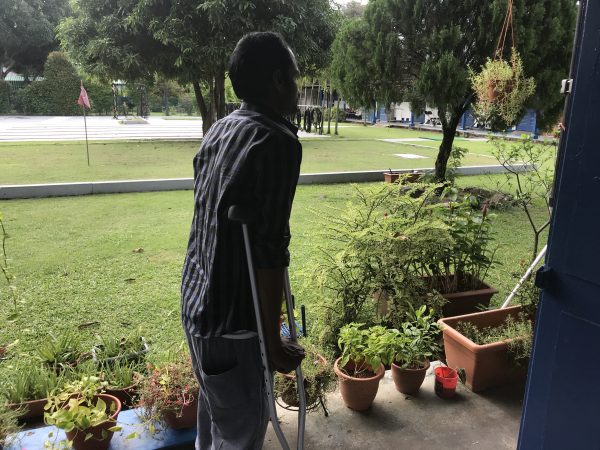 The 27 year old is the sole breadwinner and like any foreign worker, he came to Singapore to work in hope of giving his family a better future. Jai works a hectic shift from 8am to 10pm every day and has bare minimum rest. Despite the long working hours, Jai knew he had to persevere on in order to support his wife, 75 year old dad and 65 year old mum back home. He also knew he had to work harder to repay the $4000.00 that he borrowed just to come to Singapore. His dream of a better future for his family was dashed and shattered to pieces, when he was met with a workplace accident in early August this year. Yet, his employer has been delaying treatment and discounting the severity of his injury by asking Jai to take painkillers. Today, Jai is on crutches and is awaiting total hip replacement. During these few months when he can’t work, he is also not getting the full sum of his MC wages that he is entitled to.

The accident took place when he was on the company lorry returning back to the dormitory after a long day of work. The lorry carried 50-60 foreign workers packed at the back and the driver was speeding and driving recklessly. When it hit a bump on the road, Jai who was seated at the back of the lorry was propelled up and backwards with great force towards the back. He hit his left hip against the metal bar and was in great pain. Jai informed his employer of the injury but was told that the pain would subside. He had no choice but to take painkillers to endure the pain throughout the entire night.

The next day, Jai did not receive immediate medical attention, instead, he was told by his boss to work off site. His pain soon became unbearable and his employer finally decided to bring him to a nearby clinic for treatment. Despite being advised by the clinic to bring Jai to the hospital, his employer has time and again delayed treatment. The doctor has recommended for Jai to get a total hip replacement at a local hospital, but up till today, there is still no news of a surgery being scheduled.

The 27 year old is helpless at his current situation. His family lost their house in a flood last year and are currently residing in a temporary home. Jai has not been sending remittances back home for the past 3 months and is struggling to get by himself without receiving his full MC wages and living allowance from his boss during the period of time he was injured.

ROHI would like to raise $900.00 ($300.00 for 3 months) to give hope to Jai and his family while he recuperates and seeks medical attention!