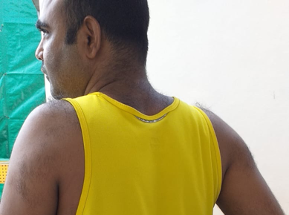 Mr MH is a Bangladeshi Migrant Worker who supports his family of 5 back home. His parents, wife, son, and sister are all dependent on him.

He was injured on 20 September 2019 at his worksite, and he was hurt in the back and shoulder.

He was obliged by the company to stand a makeshift ladder structure for his work, which involved rebar casting. There was no industrial grade ladder or elevation machine. This makeshift structure was just metal parts bound together with wires, made by the workers themselves and there was no safety harness provided. He fell from the ladder at a height of 6 feet while trying to come off the ladder, he hurt his back and shoulder.

After he fell, the company gave him some ointment to apply on his skin. The pain did not subside, and yet the company did not send him to the doctor. He was asked to sit aside for some time. Mr MH was lost and confused, in great pain, and helpless. When he finally realised that he was not getting medical attention if he depended on the company, he took the advice of some colleagues to get help on his own from the hospital. He took a taxi to admit himself at the Emergency department of Ng Teng Fong General Hospital – this was on the same day that he fell.

He was admitted and warded for 2 days at NTFGH where he had an x-ray taken and was given painkillers. Upon discharge he was relocated to the 4th floor of his dormitory even though he had a note from the doctor that he should stay on the ground level.

Prior to the accident, he had been working for 16 months. He was earning $850 a month and sent home $550 monthly.The employers are housing him in Tuas but have not provided him with meals or his due MC wages for 3 months. He is unable to extend his MC any further but has been on a Special Pass since the injury.

Mr MH also has a debt debt of $5300 in his home country, and $300 local debt in Singapore to peers who helped him out in this difficult time.

Hope you will recover from your injury and resume work soon.

I hope this helps you start over again with renewed hope. Never give up. Goodness and hard work will have its rewards. Take care.

Bless you, brother. Sorry that this happened. Please take good care of yourself and get well soon. We support you and pray for you!

Encouragement from friends of Healthserve

Don’t give up on hope