Help a positive elderly get through this period 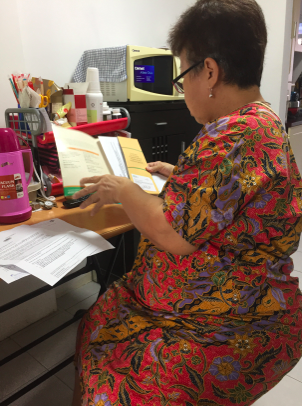 At 66, Mdm Ong wishes to still able to move around easily independently. Unfortunately, she suffered a severe fall sometime in September 2018, resulting in her undergoing surgery. The 66-year-old used to support herself with the income that she earned as a coffee shop assistant and cleaner subsequently.

After the surgery, Mdm Ong has become reliant on a walker to get around, and has difficulties supporting herself during the recovery process. Prior to her fall, she also underwent a knee cap replacement surgery for both knees. She also suffers from other medical conditions such as high blood pressure, hypertension and high cholesterol.

Give Hope during this festive season

Mdm Ong has two adult sons, but she has been living alone since her spouse passed on many years back. Her older son who is 42 this year, was recently released from the prison, while her younger son has his own family to support. Mdm Ong confided in us that while she feels heartened that her elder son has turned over a new leaf, she knows that it will not be an easy journey for him to move forward. With a past that would have a negative impact on his future, Mdm Ong told us that she does not expect him to be able to support her financially.

Mdm Ong’s younger son is working and contributes to the family by paying for his mum’s household bills. However, with their estranged relationship, Mdm Ong feels helpless about the situation and hopes to be able to return to work soon in order to avoid deterioration of their relationship. Mdm Ong’s son also has 3 young daughters to support.

When the case workers met Mdm Ong, her chatty and outgoing personality struck a chord with us. Yet we could also sense her helplessness at how she is unable to work for the time being to support herself, for fear of further straining her relationship with her children.

ROHI would like to raise $1,200 ($300 x 4 months) for Mdm Ong’s living expenses while she is recuperating from her surgery. Please donate to give hope to the elderly who hopes to be self-resilient!