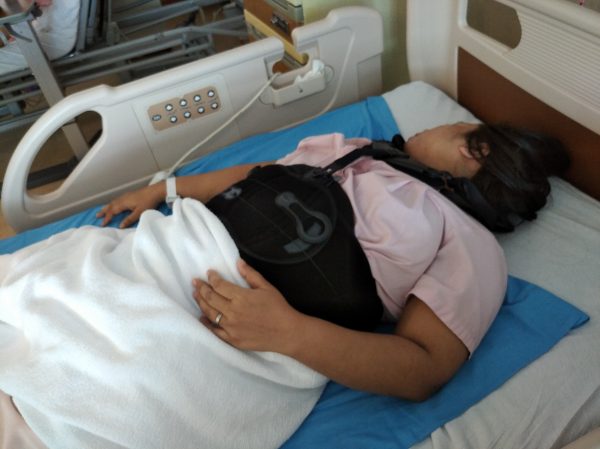 Mdm Suryati* is a 34-year-old single mother to 4 children between the ages of 4 – 14 years old. She divorced her husband two years ago after he cheated on her. With very little employment opportunities in rural Indonesia, Mdm Suryati came to Singapore in March this year to work as a domestic helper in order to provide a better life for her 4 children.

Mdm Suryati informs us that her children does not have a permanent roof over their heads. After her divorce the caregiving duties falls entirely on Mdm Suryati as her husband does not provide for his children. As she was working in Singapore her children currently shuttle between two houses, Mdm Suryati’s mother’s house and her ex-mother in law’s house.

Mdm Suryati informs us that she faces enormous financial stress and pressure. She did not receive any salary as she has to repay back her agent. Her mother and ex-mother in law were having difficulties in caring and providing for her 4 children. Mdm Suryati alleges that her employers were difficult on her and restricted her movements. She had to report the number of times she visited the toilet each day and she has to inform her employers of the food she had consumed from the household. Mdm Suryati also alleges that her employers used harsh language on her and constantly nit-picks and scolds her.

Due to the impact of the fall she broke her spine and her right foot. She has undergone surgery and is currently recuperating. Once she is deemed fit enough to be discharged, she will be repatriated back home. Ray of Hope would like to raise S$1,500 to defray her innocent children’s living expenses. Please give hope to Mdm Suryati and her 4 children!

* Name has been changed to protect the identity of Mdm Suryati

hang in there and hope you get well soon!