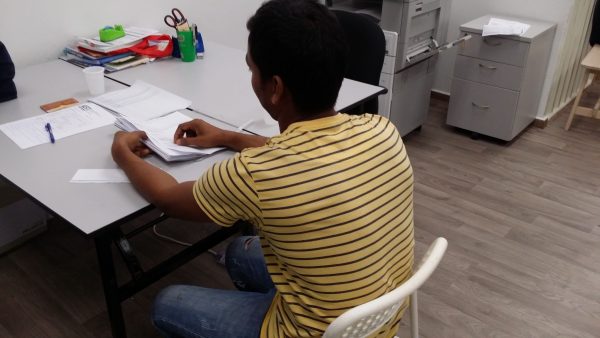 JH is from Bangladesh, age 28, married, with a young 3-year-old child. He was injured on 15 January 2019 at his worksite, and he was hurt in his neck, and lower back, and leg.

While installing air-con duct around 25 meters high he fell and hurt himself when the scaffolding gave away. After taking off his harness he realized where he got hurt. The next day he went to the company clinic where he was given one day MC but he continued to work. He was given heavy work but he asked for light work. He was still in pain after 4 days, so he asked for a letter to see a doctor. But he was not given any letter and was asked to work. He went to the clinic again two days later, and was given one day MC and some medicine. He was unable to work because of pain. He then went to the hospital and paid for the consultation and X-Ray out of his own pocket. He was given 3 days MC and an appointment to the polyclinic. On 13 March 2019, he was asked to pack and leave for the airport. At the airport he informed immigration and he was re-directed to MOM. He eventually continued treatment at the hospital, by going to its Emergency Department for medical attention, which he hopes to appoint as his treating hospital when his WICA claim shall finally be established by MOM.

From March 2019 until present, his injury claim has been under investigation by the Ministry of Manpower. He had objected to the Notice of Assessment by MOM that his injury was not due to employment in July 2019. He struggled to prove the validity of his WICA claim, as the co-workers gave false statements in favor of the employer. In mid-November 2019, due to new evidence that contradicts the statements provided by the employer, Mr JH was told that his case is finally admissible under WICA.

MOM asked him to get legal help because of the employer’s disputing his claim that this was not a case of a worksite accident. He was obliged to seek pro bono help from TWC2, and extend his stay in Singapore. His employer is not providing him with financial support but has given him housing and food. He is in dire need of financial assistance to meet the sustenance needs of his family.

Ray of Hope would like to raise $1500 ($500 x 3 months) for Mr JH while he enlists legal help to validate his claim of work injury.

I am so sorry that you were treated this way... I hope that you will continue to look on the bright side and know that people out there do care for you and your family! Please take care and don\'t give up. I wish you a speedy recovery, and for your family to be well and healthy too.