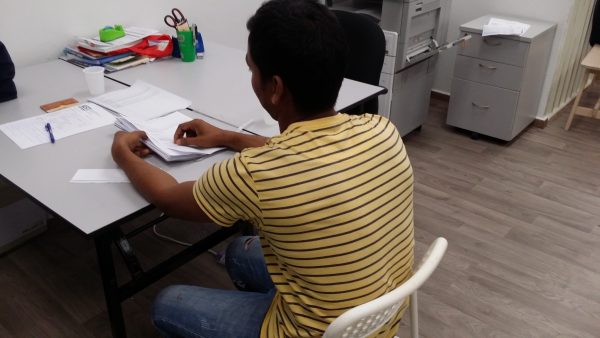 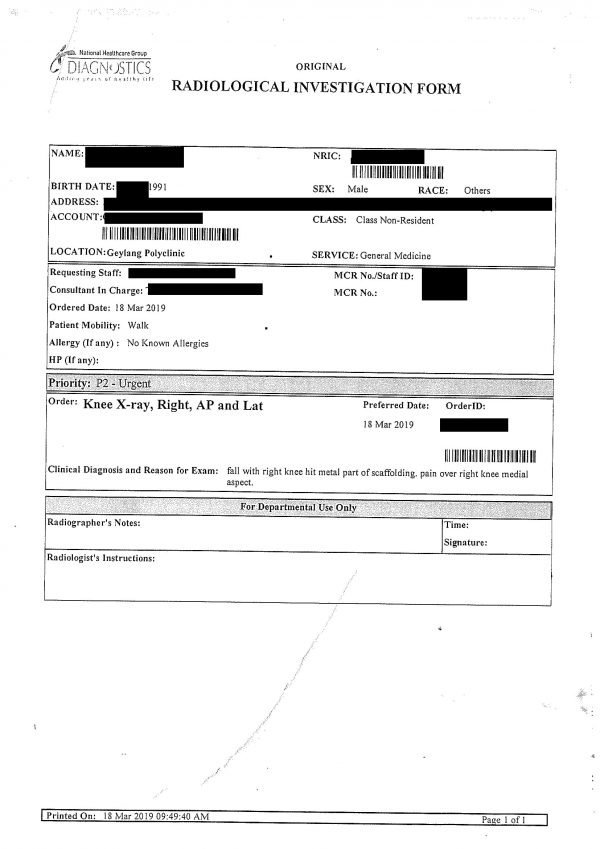 Mr J* is 28 years old and is a father to a 2-½-year-old son. He comes from a rural village in Bangladesh where he and his family lived in poverty. In order to escape crippling poverty and to provide a better life for his then newborn son, Mr J borrowed nearly S$5,000 from family and relatives to pay an agency that will help him find employment in Singapore. He came to Singapore in March 2016 and worked as a construction worker earning a small salary of S$702 a month. Mr J informs us that he would occasionally work double shifts, working for more than 12 hours a day.

On the 15th of January 2019, after his shift of more than 8 hours has ended, Mr J was asked to continue working at a different construction site. He was tasked to install an aircon and was on a scaffolding. Mr J informed us that while he had a harness on, there was no place for him to secure and hook the harness in place. His supervisor informed him that it was an easy job to do and there was no need for the harness to be secured in place. While Mr J was installing the aircon, the scaffolding underneath his feet gave way. While Mr J was able to hang onto a pole as the scaffolding fell, an exposed metal pipe pieced his knee cap and thigh.

Despite the severity of the injury and Mr J was bleeding, his supervisor refuses to send him to the hospital. Instead, he was sent back to the dorm where he was given off the counter medication. 2 days later, Mr J visited the company’s doctor when the pain persisted. Despite visiting the company doctor, his condition did not improve and the pain on his knee cap and thigh worsen. It was nearly 2 months later, on the 7th of March 2019, that Mr J sought medical treatment at a hospital as the pain became unbearable and he had difficulties standing and walking.

As Mr J sought hospital treatment without the approval from his employer, they terminated his work permit and tried to forcibly return him back to Bangladesh. While he was at the transit area at the airport, he sought assistance from the relevant authorities and Mr J is currently awaiting the outcome of his compensation from MOM.

Mr J requires assistance with his living expenses while he awaits his compensation outcome. He is currently staying in an open market rental dorm and struggles with his rental and day to day expenses. Ray of Hope is raising S$1,200 (S$300 x 4 months) to defray Mr J’s rental and living expenses. Please give hope to Mr J while he seeks recourse and justice!

*Name has been changed to protect the identity of Mr J

Get well soon! All the best.

Hope you get better soon and get your compensation. I am shock at how cruel your company is, they are inhumane! Appalling!!