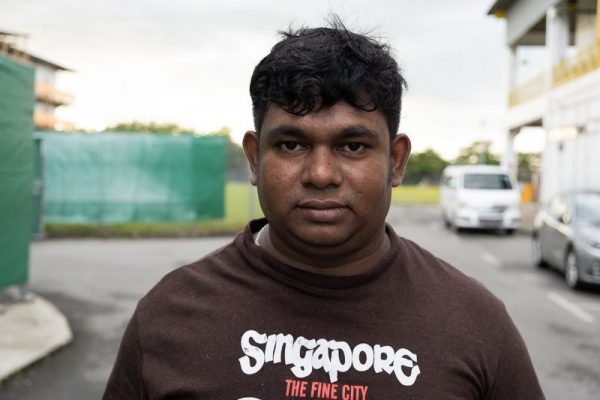 Miah Lal, aged 31, came to Singapore in 2017 in hopes to provide a better life for his family in Bangladesh. He moved to Singapore after paying S$3,800 in agent fee. However, his journey since then has not been easy. With his $900 salary, he provides for his elderly parents, wife and 3-year-old daughter. He also has to support his siblings’ family financially as his brother and brother-in-law lost their employment recently. In total, he has to provide sustenance for nine family members in Bangladesh.

Not long after he started working in Singapore, Miah Lal met with a workplace accident on 4 September 2017. While he was installing a ceiling fan, he lost his balance and fell from a 1.5m ladder. He was then immediately bought to the hospital to be treated. The mishap resulted in the injury of his back bone and he had to go through a surgery to insert a metal plate along his spine.

Despite the dangerous nature of his job, Miah Lal’s employer did not purchase insurance for the year, thus he is not entitled to receive the disability compensation as hoped. To make matters worse, his employer was uncontactable after his treatment and his MC wages of $12,000 was not given. Since the accident, Miah Lal has been unemployed. Hence, he is unable to send any money home to his family. With no one to turn to, the helpless worker is worried about how to provide for his family.

Ray of Hope would like to raise $2,600 ($650 x 4 months) for Miah Lal’s living expenses and to allow him continue sending some money back home to his family while he tries to settle his compensation issues.

hey man, hope you are coping fine. Here\'s a little something to help you in your journey, however tough it may be, and I hope it will make your day just a little better.

We are donating on behalf of our dear friend Kanya, who are celebrating her birthday. Hope this small donation can be helpful for you.

There is always rainbow after heavy rain.. i will pray for you.

Every migrant worker sends home more than half of their hard-earned salary to support their family, and leaves only a few dollars a day for their own food. No amount of support is too little to help these migrant workers get on with life.