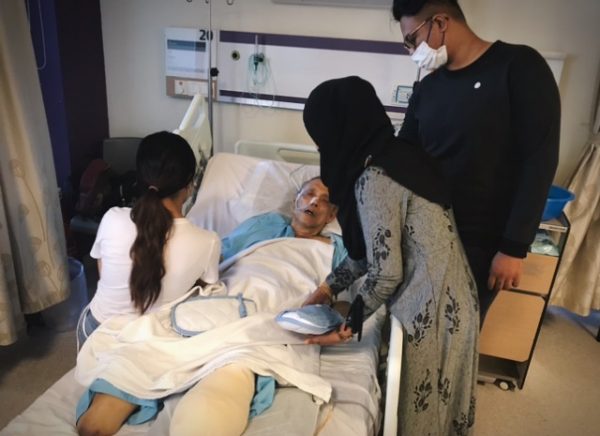 Mr. Aman was working as a security guard previously before he was hospitalised for his diabetes. In total, he has gone through three amputations to manage his condition. Mr. Aman actually delayed his second amputation as he still wanted to continue supporting his family financially. Unfortunately, the delay led to the deterioration of his diabetic leg. Thus, both his legs had to be amputated. Due to the sudden loss in mobility, Mr. Aman has not been coping well emotionally. Since then, he has stopped working and is confined to his bed, leaving his wife to care for their three school-going children.

Mr. Aman’s wife works as a canteen operator earning S$900 per month. She also applied for financial assistance from the SSO and is receiving S$310 from them. However, this amount is barely sufficient for the family to get by each month. As the sole breadwinner and the caregiver of three children and her husband who is now a double amputee, Mr. Aman’s wife is under immense stress.

Ray of Hope would like to raise S$4,500 for Mr. Aman and his family.  This will help them with their groceries and living expenses for the next 5 months ($900 x 5 months).

Please accept this small token from One Power Services.

All will be well. Have faith. Donating in my father\'s name, Ratha.