Your donations can bring hope to Mr Soh’s caregiving journey! 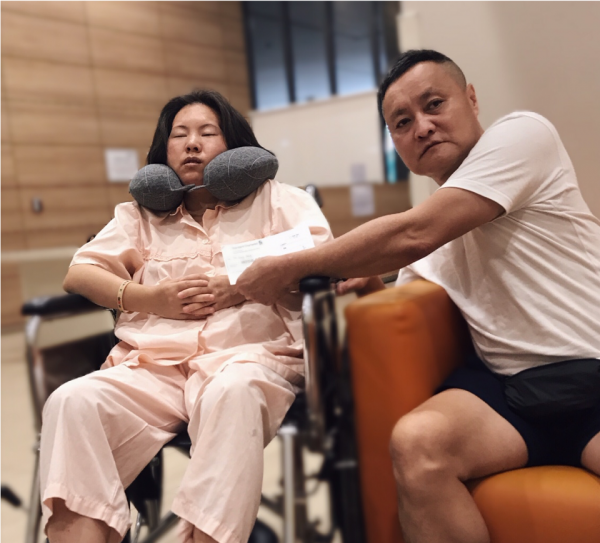 Ray of Hope has previously assisted Mr Soh and Madam Hou by raising S$1,530 for them. Unfortunately, barely three months after moving into a home to call their own, the couple met with an accident when an SBS Transit bus hit the bicycle that they were riding on from behind. Mr Soh was thrown onto the grass verge while Madam Hou landed on the concrete pavement. The sides of Madam Soh’s skull were crushed in the accident and had to be reshaped with plaster. Since the accident, Madam Hou was permanently disabled, with her staring into space most of the time, unaware of what is going on around her.

As a result of the accident, Mr Soh, who was working as a taxi driver then, is now unable to work as certified by his doctor. Mr Soh is currently on MC and it ends in January 2020. He is currently owing HDB close to $350,000 as he is behind payments to HDB since he became unfit for work.

The accident has not only robbed Mr Soh and Madam Hou of their health, but it has also caused much distress to Mr Soh while he has been trying to upkeep the $2,000 monthly instalment for their 4-room flat with a rental income of $800. During this period, he has been making ends meet with the $470 from SSO that he is receiving.

The case workers recently met Mr Soh for his last cheque disbursement and we were updated by Mr Soh that he is currently awaiting for updates from his lawyer on his compensation matters, and confirmation from HDB on his intention to downgrade a one-room rental flat. Mr Soh is also hoping to Mdm Hou to a nursing home nearer to home as he spends 3 hours (two-way) travelling to and fro the nursing home. Unfortunately, she does not qualify for entering a nursing home due to the age criteria with her age of 37.

Even with a caregiving journey fraught with challenges, both emotionally and financially, Mr Soh devotes all his time caring for Madam Hou and attending to her needs.

While Mr Soh is awaiting updates on his housing plans and compensation matters, Ray of Hope would like to raise another $1,920 ($320 x 6 months). This is an increase from the previous monthly assistance of $255 from his previous fundraiser due to the increase in his transport expenses and Madam Hou’s diapers needs.