Your donations will bring hope to the family of 6! (FULLY RAISED) 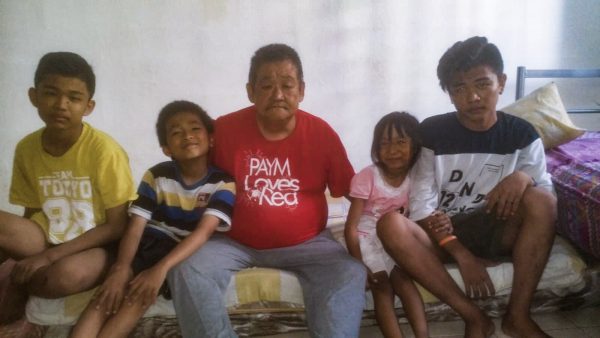 Mr Cheng, 66 years old, used to be a healthy individual who has worked for more than four decades as a wholesaler. Mr Cheng is married to an Indonesian and has 4 children aged 16, 14, 11 and 7 years old. The family used to reside in Indonesia before moving back to Singapore after their second child was born. Among his four children, only one of them is a Singaporean while the rest are Indonesians.

Residing in a cramped 1-room rental flat, the father of four children spoke to the case workers about how difficult life has been for them since they moved back. When the case workers visited their home, they could not help but notice that the entire flat only has one light bulb, and the environment is unconducive for his young children, especially when the school-going boy needs to do his homework. Mr Cheng also told us that his 42-year-old wife has previously applied for a Long-Term Visit Pass (LTVP) so that she can work to support the family. Unfortunately, her application was rejected as only one of their children holds a Singapore citizenship. Their application for their children’s Students’ Pass was also rejected.

It’s not easy bringing up 4 children, especially when the family has been undergoing a difficult time coping financially since Mr Cheng had to stop working due to his ailing health about 3 years back. With a host of medical issues to deal with himself, Mr Cheng feels extremely helpless about not bringing food to the table for his family. Mr Cheng is diagnosed with Chronic Obstructive Pulmonary Disease (COPD), high blood pressure and high cholesterol. The 66-year-old also has cataracts on both his eyes. Some of his left toes were also amputated back in 2017 due to his diabetes, which is currently controlled by medication. Since his amputation surgery, Mr Cheng has been unable to stand for too long and still walks around with a limp.

With the help of his social workers, Mr Cheng is appealing for his wife’s Long-Term Visit Pass so that she will be able to engage in some form of employment to sustain some income for the family. In regards to the Student’s Pass for his two younger children, they have also submitted an appeal against the rejection. The family has been fighting hard on their appeals, in the hope of sending the children back to school one day so that they will not be deprived of the chance to attend school.

Mr Cheng is currently receiving a quarterly CPF payout of $750 and has appealed to SSO for assistance. He also understands that even if his SSO application is approved, it would only be for his Singaporean son and himself.

ROHI would like to raise S$1,800 ($300 x 6 months) for Mr Cheng’s family while they appeal to the various agencies for help. We hope that the amount can help to defray the family’s food and sundry expenses. Please donate to give hope to the family struggling to make ends meet!