Donate to help a father and son with living expenses 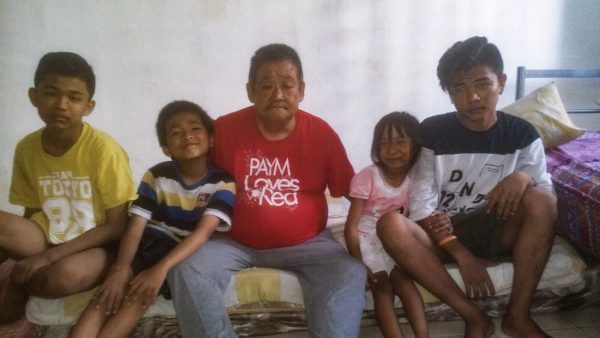 Ray of Hope has previously assisted Mr Cheng and raised $1,800 for his family. When we met Mr Cheng a couple of months back, the case workers were updated that Mr Cheng has been unable to renew his SSO assistance as he is currently waiting for his doctor’s appointment scheduled in mid December. As he is required to submit his latest medical memo for his public assistance renewal, he is unable to do so until he receives the memo from his doctors. While the rest of his three children are already back home in Indonesia and being cared for by his wife, Mr Cheng is currently staying in their rental flat with his 15-year-old, the only born Singaporean among his 4 children and the only child who is currently schooling in Singapore. Through our conversations with Mr Cheng, he told us that as much as he hopes that the family can be reunited, he does not wish to sacrifice his child’s opportunity to receive quality education here in Singapore. After all, Mr Cheng’s son is also receiving maximum subsidies for his school fees.

The proud father also told us that his son has been coping well in Singapore and enjoys studying here. Although it took the 15-year-old a long while to re-adapt to the new environment while being away from his friends and having to pick up the English language now, Mr Cheng feels greatly comforted when the school informs him that his son has made significant progress in terms of his daily interaction and communication skills with his peers in school. Looking back at his son’s milestones and accomplishments today, Mr Cheng does not wish to re-locate his son and cause disruption to his studies, although Mr Cheng has been struggling to provide for their living expenses being unfit for employment.

The duo was only relying on the SSO assistance of $300 and the donations from Ray of Hope to get by. Now that both assistance have ended, Mr Cheng is worried about making ends meet, especially when he is now suspected of being diagnosed with kidney issues.

Ray of Hope would like to raise $900 ($300 x 3 months) for Mr Cheng as he awaits his medical appointment. The renewal of his SSO assistance is likely to take between 4-6 weeks to process. Your donations can help defray the groceries expenses for Mr Cheng and his school-going son!

*Mr Cheng is currently not receiving assistance from SSO.

Stay strong because things will get better. It might be stormy now but it can’t rain forever. :) From - EddyHobson Charity Team