Helpless worker appeals for your kindness 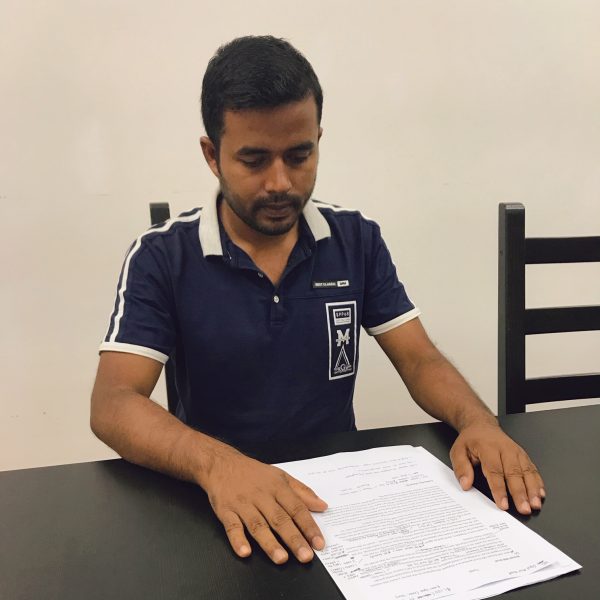 Like most foreign workers who left behind their family to work in Singapore, Somraj was determined to break the poverty cycle for his family. Unfortunately, his dream of improving the lives of his family were dashed when he was involved in a workplace accident last September.

The accident took place when Somraj, 32 years old, fell 2 metres at the shipyard where he was working at, while working on support fitting. Somraj landed on an I-beam in the worst possible way, and the poor worker sustained injuries on his head, back and fingers. He was sent to the hospital, where he was warded for a night. Somraj was subsequently given 6 months of medical leave. The worker who was able to work and send remittance back home was suddenly unable to work.

Somraj used to earn up to S$800 a month and the bulk of his salary went towards repaying the loan taken to pay for his agent fees (S$7,000). In order to come to work in Singapore, Somraj’s family had put up their home for mortgage for a loan, and the home was everything that the family owned. With what he had earned before the accident as well as his MC wages amounting to S$1,050, Somraj has only managed to repay part of the loans the family has undertaken from both the bank as well as their relatives and friends. Todate, Somraj’s family still has unpaid debts amounting to around S$4,000. Before the accident, Somraj managed to send remittances home with the salary that he was earning.

The accident has not only robbed the 32-year-old of his health, but it also threw his family’s into disarray when the sole breadwinner of the family can no longer work to support his family. After his accident, Somraj was unable to walk for a long period of time, and heavily relied on medication and exercise to get on his recovery process. Somraj’s medical leave has ended on 28April 2019 and he is awaiting for his next doctor’s appointment in June. He is currently undergoing TCM and physiotherapy treatments offered by a migrant worker advocacy organisation in hope of nursing his health back quickly.

Somraj’s meals are currently provided for by a migrant worker advocacy organisation. Since his accident, Somrajhas approached the Ministry of Manpower (MOM) to seek compensation from his employer, and he understands that it will take months before MOM reverts to him with an answer. Somraj’s medical expenses are currently paid for by his employer.

Hence, ROHI wishes to raise S$920 ($230 x 4 months) to defray Somraj’s living expenses while he waits for the outcome of his compensation by MOM. Your donations would bring comfort to the helpless worker and his family!

*Ray of Hope case workers have cited medical documents provided by Somraj. However, they will not be published as he is currently awaiting closure on his MOM compensation.